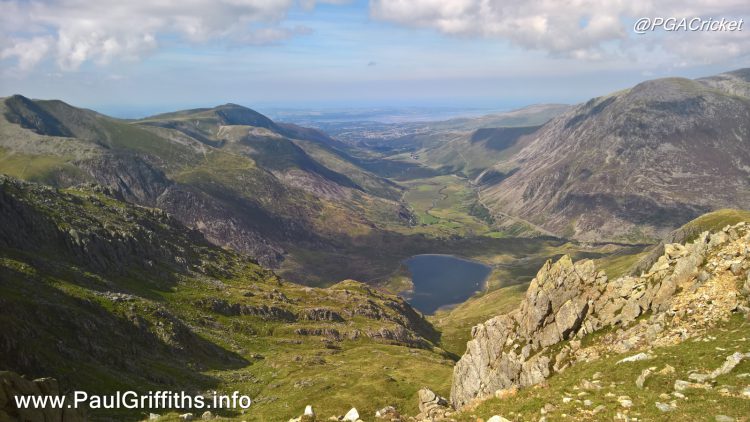 Walked from A5, Bangor, LL57 3OS Grid Ref: SH 66293 60283 up Tryfan via the Heather Terrace and then to the saddle before the ascent of Glyder Fach The Purple Moose Snowdonia Ale was carried up and down

Weather was excellent hottest day of 2016 for me in North Wales – tough to walk having to consider sun protection, and id I plan enough water to take up the mountain and down Section 1 (5-6am) we aborted due to the high winds – yes Section 2 we found ourselves in the same conditions correction worse conditions with high gale force winds.

Due to the conditions we did not complete Mountains 11 and 12 and aborted after Glyder FAWR as the conditions were very Wintry – with gale force wins – some gust probably reaching motorway speed limit or faster, horizontal driving snow, and rain.

Sadly in white out conditions we came off Glyder FAWR wrong, and and did not drop into Nant Peris as planned but tried to drop into Llanberis Pass (mid way along towards the Youth Hostel) but could not due to the sheer drops. So we had to skirt further east and eventually landed on the A4086 by the Youth Hostel and Caffi at 18:58 having started the ascent of Tryfan at about 10am. So you see why we aborted but got “lost” in the white out  on Glyder Fawr.

We even missed the Cantilever just past Glyder Fach as we walked past in the white out!!

Blown around frequently but some were not good as Llwyd receiving a knock on the knee caused by the wind blowing him off his feet and his knee finding a rock!!

marvellous mountains on nice days, but 31 March 2015 we experience a white out on Glyder FACH where we could not see anything except ourselves. Map reading and compass a challenge

We did not take many photos none on Tryfan, Glyder Fach or Glyder Fawr due the wintry gales. The following pictures are with us on Tryfan. Even then clouds full of snow were swirling around looking for a home and dropping the snow at random!! no fool should attempt such when the forecast is high winds and gales with snow.

An Olympic Medal win for Effort?

Tough for both – Dad yes and for Son Llwyd Very Tough

We hope this post gives you a flavour of what we encountered, although it will never fully convey as we were there in it and doing it.